Co-presented by the Whizin Center 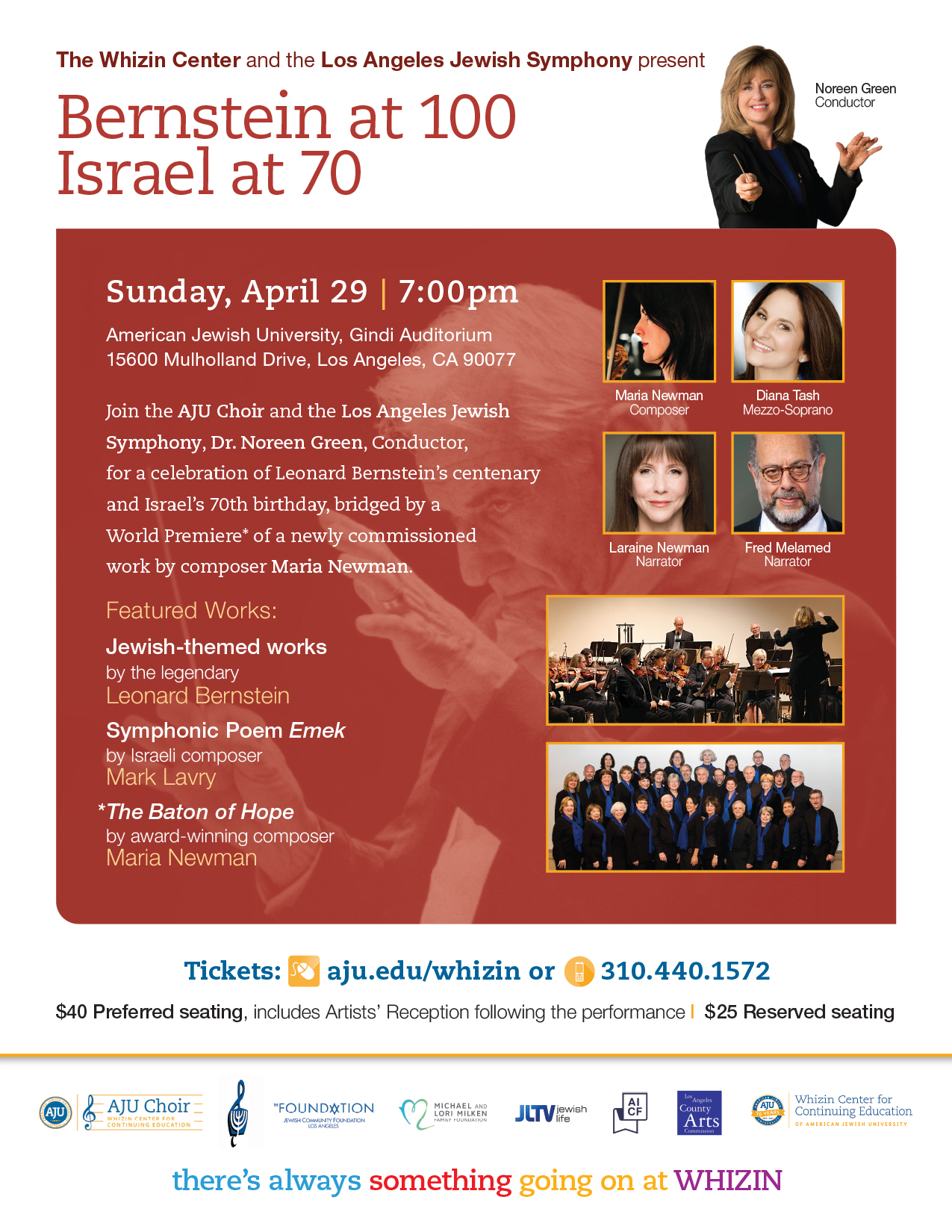 On April 29, 2018, the LAJS performed Bernstein at 100/Israel at 70 to a SOLD OUT audience in the Gindi Auditorium of the American Jewish University.  This concert celebrated Bernstein’s centenary and Israel’s 70th birthday, bridged by a world premiere of a newly commissioned work by composer Maria Newman. As part of our continuing partnership, the AJU Choir joined the Symphony during the first half of the program, was devoted to works by Bernstein.

“Truly an inspirational concert, it is always a pleasure to sing under [Noreen’s] baton. I loved the music that she chose and so did the audience. Congragulations on a most successful evening. The audience was singing your praises. “ 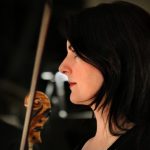 Maria Louise Newman is an American composer of classical music, violist and pianist. Maria holds the Louis and Annette Kaufman Composition Chair; and the Joachim Chassman Violin Chair at the Montgomery Arts House for Music and Architecture in Malibu, California, and is a founder of the Malibu Friends of Music. Her library of original works represents a range of genres, from large-scale orchestral works, works for the ballet, chamber works, choral and vocal works, to new collaborative scores for vintage silent film. 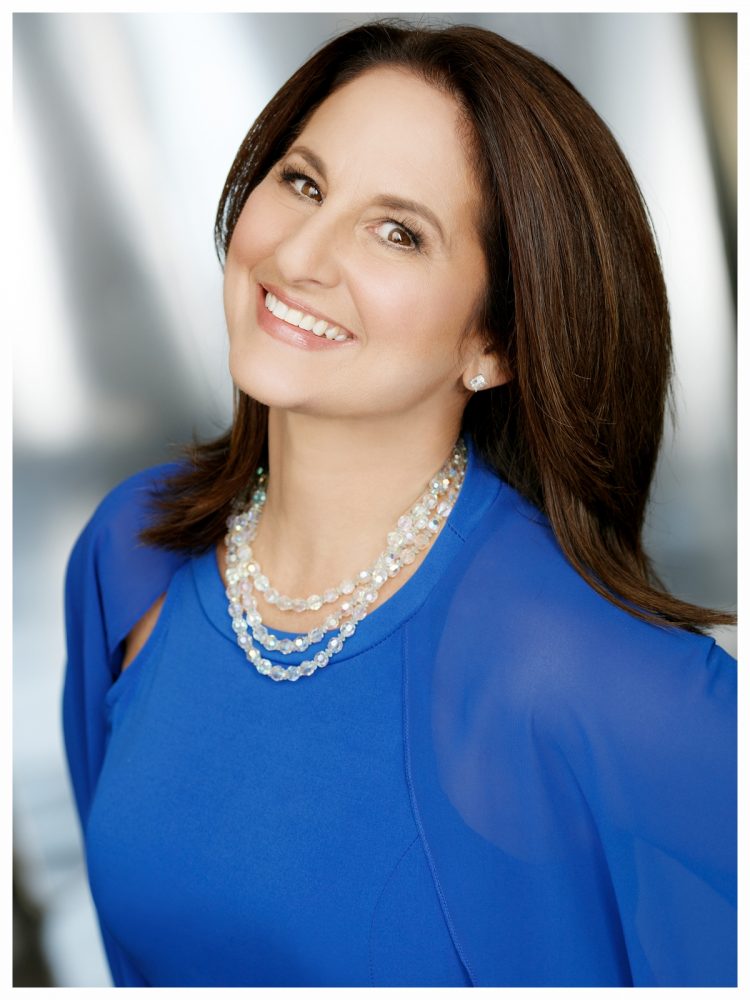 American Mezzo-Soprano Diana Tash appears internationally in both operatic roles onstage and as a featured soloist. Ms. Tash and the late, renowned counter-tenor Brian Asawa released their Baroque duet album “Spirits of the Air” in October 2014, preceded earlier that year with a tour that included dates inSan Francisco, Los Angeles and Mexico, the latter at Guadalajara’s famed Teatro Degollado for the annual Festival de Mayo celebration.

Laraine Newman is an American actress, writer and comedian who is most famous for her part of the original cast of NBC’s Saturday Night Live and played the main villain Lawanda Dumore in the film Problem Child 2. 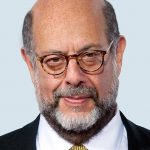 Fred Melamed (born 13 May 1956) is an American actor and writer. He was born and raised in New York City, in a show business family. His mother was actress Syma Melamed, and father, Lou, was right hand man to television pioneer Nat Hiken, and producer of many early shows, including The Nat King Cole Show, Let’s Pretend, Sgt. Bilko, and Car 54 Where Are You? Melamed was adopted, and as an adult became acquainted with his biological parents, Actor/Director Nancy Zala(Round Numbers), and British psychoanalyst, Stanley Silverstone, who was related to noted theatrical family, the Adlers, including Luther and Stella Adler. 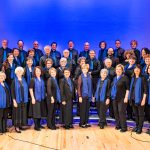 Enriching the experience offered to the community from the Whizin Center for Continuing Education, the American Jewish University Choir, under the direction of Dr. Noreen Green, is raising its voice. Jewish choral music has the unique ability to educate, strengthen the community and transmit Jewish heritage. Part of the AJU Choir’s concert repertoire pays tribute to the composers and musicians who helped build the legacy of Jewish music.

A statement from our Maestra Green regarding Bernstein’s connection to Israel and how the commissioned piece evolved:

“When I first decided to create a program celebrating Leonard Bernstein’s centenary, I knew it had to include Israel’s 70th birthday, as well. Bernstein’s profound musical and humanitarian relationship with Israel began when the land was still called Palestine, and it remained a love affair throughout his life. Theprogram will include traditional music of Israel; sacred, stage and concert music of Bernstein; and three versions of Israeli composer Marc Lavry’s Emek, which was chosen by Bernstein in 1950 as the representative Israeli composition for his first American tour with the Israel Philharmonic Orchestra.  But I needed a new piece, a work that would tie all the connections together. The obvious answer was Maria Newman.

“Maria is a luminous light who creates joyous music from a deep, thoughtful perspective.

She and I have had many discussions about what it is to be connected to one’s Judaism. Music, for me (and I believe for her), is a non-threatening means of connecting with one’s Jewishness, which includes the relationship to Israel, at all levels. Maria Newman is an American composer who, as a youngster, grew up with the sounds of Leonard Bernstein, a yeshiva boy whose music is infused with his Jewish soul and deep connection to Israel. Additionally, Maria has been deeply inspired by the music of her father, the great American film composer Alfred Newman, whose Jewish background was important to, but not necessarilyapparent in the work he produced. With this combination of influences present in Maria’s distinct musical language, I believe her to be the perfect combination of talent and sensitivity needed to compose a work bridging the soulful aesthetic of Bernstein and the music of Israel; between past and present.”